What Is Life? And Other Interdisciplinary Questions

Posted on September 11, 2018 by Jessamyn Fairfield | Leave a comment

Scientists, like most people, want to understand the world they live in. We examine the physical structure of the world, in the hope that understanding the rules governing it will also lend some clue as to what it all means. Ironically, as the boundaries of scientific knowledge grow, the possibility of any individual scientist grasping this entire meaning gets smaller and smaller. Even within science, the traditional disciplinary boundaries—biology, chemistry, physics—often separate scientists who should really be talking to each other. I have always loved talking to people who know different things than I do, prompted by curiosity and encouraged by family. But it can be rare to see famous scientists doing the same.

Erwin Schrödinger, a physicist famous for his mathematical and philosophical development of quantum mechanics, tried to reach across these boundaries and ask the question that compels so many of us, namely ‘What Is Life?’ His historic lectures were given in 1943, against the backdrop of world war and 75 years behind our current understanding of biology. And in a wise move for anyone trying to understand something new, Schrödinger began by admitting what he didn’t know: to him, the difference between what physics and biology had to say about life was the difference between “a wallpaper and a Raphael tapestry”. 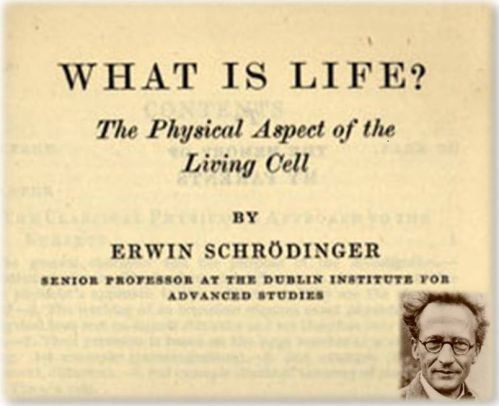 And yet, connecting physical understanding to biology has provided significant insights. When these lectures were given, the DNA molecule itself had already been discovered, but the double helix structure was yet to be found, along with much of our modern understanding of how this blueprint for life works. And yet the stability of the DNA molecule in the cell is directly due to the quantum basis of chemical bonds. Schrödinger expresses amazement that even with the perturbations caused by heat and environment at the molecular level, the naive physicist’s expectation of wild variability is incorrect, and chemical stability holds. While DNA does sometimes mutate in ways that persist through generations, forming the basis of natural selection, its ability to reproduce error free throughout our lives is amazing from a physics perspective. Especially when one considers the consequences of uncontrolled mutation, as the world would see only two years later as radiation-induced mutation caused terrible illness in the survivors of Hiroshima and Nagasaki.

In trying to define life, Schrödinger comes to the idea of order and disorder, and the physicist’s idea of entropy. Although entropy, which is a measure of disorder, is bound to increase over time subject to the Second Law of Thermodynamics, Schrodinger posited that living beings were effectively decreasing their local entropy by exporting it, increasing order within the cell even if the broader environment became less ordered. Cheating the Second Law of Thermodynamics is a necessity for living cells, living beings, and even our planet to maintain local order. Schrodinger then concludes that living beings must be ‘negative entropy machines’, converting energy to local order, a perspective only a physicist could have come up with.

Schrödinger’s willingness to admit what he did not know, and try to combine modern biology and modern physics even during wartime to unify humanity in knowledge, put me in mind of another, less famous, transdisciplinary scientist. 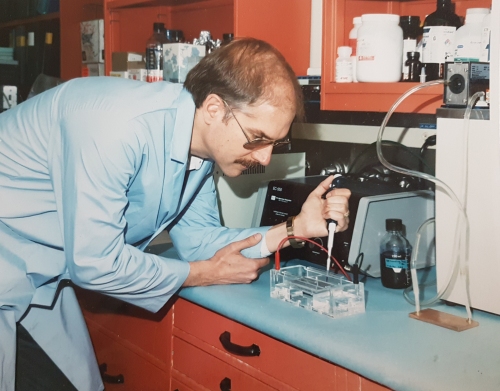 My father, Eric Fairfield, was a biochemistry professor who left academia to work on the Human Genome Project. We talked about science a lot, especially once I chose to pursue physics. I know he was proud of me for becoming a scientist, even though as a biochemist he could not resist ribbing me for my limited understanding of biology. When I read Schrodinger’s statement:

THE CLASSICAL PHYSICIST’S EXPECTATION, FAR FROM BEING TRIVIAL, IS WRONG

I could nearly hear it in my dad’s voice. The “naive physicist’s approach” to understand the cell by looking to statistical physics and randomnessi misses the stability of chemical bonds in the DNA molecule and other cellular components. In a messy, changeable environment, the blueprints that make us have persisted through thousands of generations. As my dad used to say, biology had this figured out a long time before we even knew what questions to ask.

But this isn’t to say that physicists have no business asking questions in biology, or vice versa. Biology is built on the laws of physics and chemistry, even if the exact details of how are still being puzzled out today. And questions that my dad put to me, as part of his own research, often had me questioning both physics and biology. How does a cell know what organ to build a piece of? What biochemical signals lead to the evolution of our own sensory organs, like ears or eyes? How does higher level order arise from molecule level decisions?

I enjoyed discussing these questions with him, and asking my own about the chemistry of the nanomaterials I studied, and their current and possible future biological applications. But the last big biological questions my dad asked ended up being about cancer, a scientific issue that has absorbed the careers of many researchers. Colon cancer took my father’s life last year, and when I have a question about biology, I can no longer call him to see if he’s thought about it before. At his memorial service, many friends commented how much they enjoyed talking science with my dad, whether they had a scientific background or not. He enjoyed discussing and debating these topics with anyone, even if and sometimes especially if they had a vastly different perspective to his own. But I think science would get a little bit further if we had more scientists like my father, or like Erwin Schrödinger, who were willing to cross disciplinary boundaries, admit what they don’t know, and see where they can go from here.

My scientific colleagues may find this to be a very personal response to a scientific matter. But Schrödinger himself dedicated What Is Life? to the memory of his parents. We are all searching for answers together, inspired by those who have come before, and certain to be surprised by what comes next.