Women in Science at the End of the World

Posted on November 21, 2018 by Jessamyn Fairfield | Leave a comment

It is one thing to use science to better understand the world, another to fear the world itself is crumbling all around you. And yet the scientists who were pursuing research during World War II must have felt both these things keenly, as the Great Powers became embroiled in the second major war in a generation.

Against this backdrop, scientific advances were about to become very
important to the course of the war, and the public perception of science was about to be changed indelibly. Researchers in Europe and the United States were digging to the heart of nuclear fission, an understanding of how the nuclei at the heart of atoms could split, changing into other elements in a naturally-occurring process. Fission was also thought to release an unheard of amount of energy, which in wartime led to one obvious thought: was it possible to use fission to build a bomb? 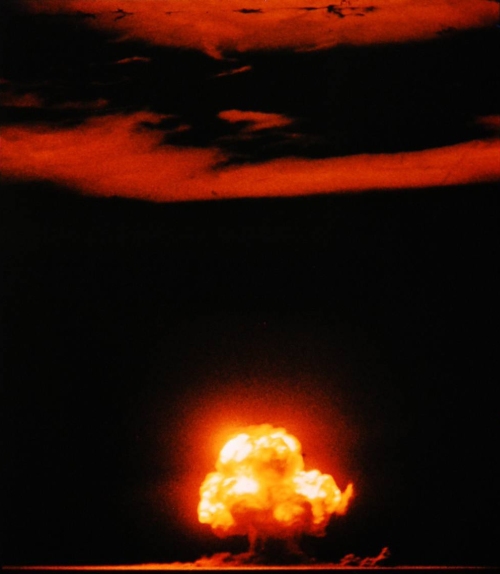 The Project
After a report from the UK was shared with the US Army, which coordinated the results of a series of secret conferences to discuss the possibility of a fission bomb and how it might be designed, the Army Corps of Engineers launched what was called ‘the Manhattan Project’. Major General Leslie Groves was put in charge, and appointed as scientific director Robert Oppenheimer, an expert in neutron collisions at the University of California Berkeley (the only university with a particle accelerator powerful enough to make plutonium, which had been recently discovered in 1941). Oppenheimer’s first task was to find a suitable location to build a lab where a fission bomb could be designed, built, and eventually tested.

As a child, Oppenheimer suffered from tuberculosis and recovered at the Los Alamos Ranch School in the New Mexico mountains. Far from any major settlements, this location seemed ideal to Oppenheimer and he suggested it as the main site for the Manhattan Project. The land at Los Alamos was purchased by the US government in late 1942, with scientific work beginning there in 1943. Initially General Groves had imagined a military installation, with the scientists in uniforms and posted away from their families. But key scientists balked at uniforms and many wished to bring their families with them. The Los Alamos scientists, working in secret, are often considered a boys’ club, plus wives. Yet even in wartime, and facing prejudice their male counterparts did not, women made huge scientific contributions to the success of the Manhattan Project.

The physicist whose work set the scene for the development of the fission bomb, though she would not have wished it, was Austrian-born Lise Meitner. Working in pre-war Germany, she and long-time collaborator Otto Hahn developed the theory and the experimental understanding of nuclear fission. But Meitner was uprooted from Germany due to the Nuremberg laws and her Jewish heritage, and she was forced to flee to Stockholm to continue her work. Her German-based colleagues left her name off several key papers, fearing repercussions from the Nazi authorities. And so the Nobel Prize for Physics in 1944 was then awarded to Meitner’s main collaborator, Otto Hahn, for the discovery of nuclear fission. Although the Nobel committee later revealed that the complications of wartime and the difficulty of assessing interdisciplinary work had contributed to Meitner’s omission from the prize, the US Army had recognized her contribution and invited her to join the Manhattan Project. Her experimental and theoretical insight had clearly been critical, and she was no longer ensnared in Nazi Germany as Hahn was. But Meitner refused to join the Project, saying ‘I will
have nothing to do with a bomb!’ Her advancement of the theory of nuclear fission was, nevertheless, critical to the Project’s success.

Among the women who did join the Project was Lilli Hornig, a Czech chemist who specialized in the newly discovered element plutonium. She had a master’s degree from Harvard when the Manhattan Project began and came to Los Alamos married to an explosives scientist, having been told that anyone
with a chemistry background would be welcomed on board.

Upon arrival, however, Horning was offered a typing job, and was only permitted to work on plutonium chemistry after saying she did not know how to type. Hornig was moved to the explosives group once lab management realised the intense radioactivity of plutonium might cause reproductive damage. ‘I tried delicately to point out that they might be more susceptible than I was; that didn’t
go over well,’ she said in an interview with Manhattan Project Voices (a public
archive of oral histories).

Hornig was eventually a witness to the ‘Trinity’ test of the first so-called ‘atomic
bomb’ in Alamogordo, New Mexico. The Trinity detonation used plutonium as its fissile material, standing on the shoulders of Hornig’s work, but after seeing the devastation it was capable of, she signed a letter along with 100 other scientists requesting that the bomb be demonstrated to the Japanese on an uninhabited island. The next two nuclear detonations occurred over the cities of Hiroshima and Nagasaki, killing over 100,000 people. After the war had ended, Hornig went back to graduate school, getting her PhD and becoming a chemistry professor at Brown University. She was a feminist and a passionate advocate for women in science, studying inequality in the sciences alongside her first love of chemistry.

Maria Goeppert Mayer was a German physicist, whose doctoral thesis was super-
vised by Max Born, the father of quantum mechanics. Goeppert Mayer came to America when her husband took employment as a professor at Johns Hopkins, but nepotism laws at the time prevented the wife of a professor from being employed at the same institution. Initially she worked unpaid, collaborating with others and eventually studying the separation of different atomic isotopes. The couple then moved to Columbia University and there Goeppert Mayer began her work with the Manhattan Project, studying isotope separation of uranium compounds to be purified into fissile fuel.

While comparing different isotopes, she began to notice ‘magic numbers’ of nucleons which led to more stable atomic nuclei. In 1945, she went to Los Alamos to work directly with Edward Teller on the successor to the atomic bomb: the hydrogen bomb, which exploited the energy from the atomic fusion of elements.

After the war, Goeppert Mayer continued to develop her shell model of the atomic nucleus, which she likened to pairs of waltzers at a dance: each nucleon was a waltzer paired with another waltzer, and more waltzing couples could be fitted into the nucleus by having some go clockwise, some anticlockwise, paralleling nuclear spin. She finally achieved her first full-time paid position as a scientist in 1960 at the University of California San Diego, after receiving her PhD in 1930. When she received the Nobel Prize in Physics in 1963, for her shell model of the atomic nucleus, the local newspaper headline read ‘S. D. mother wins Nobel Prize’. Goeppert Mayer was the second female Nobel Laureate in physics, after Marie Curie.

Each of these women had critical scientific and technical contributions to the Manhattan project, but the politics of the time and secrecy surrounding the wartime effort shrouded the impact of their work. The contributions of male scientists to the Project are more widely touted, and although Hornig, Goeppert Mayer, and Meitner are long gone, the scientific establishment today still struggles to appropriately acknowledge the contributions of women.

Furthermore, that a Czech, a German, and an Austrian were so central to ending an international war, displaced from their countries of origin, shows the value of immigration and even of wartime refugees. Despite difficulties accessing academia and key resources, female scientists played a major role in the Manhattan Project, the building of the first atomic bomb, and the end of World War II.

This entry was posted in Physics and tagged particle physics, physics, women in science. Bookmark the permalink.